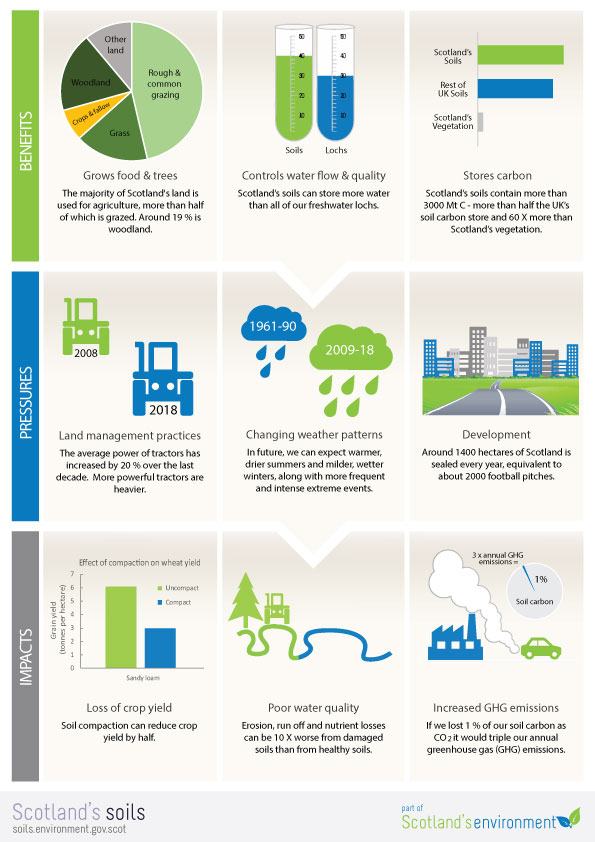 Scotland’s soils provide many benefits; from growing food to protecting the quality of water in our rivers and lochs, to being a hugely important carbon store.

We all need to look after our soils so that they can continue to provide the benefits we need, now and in future.

Check out our soil infographic (pdf) which shows some of the key benefits our soils provide, what damages our soils and the impacts that damaged soils can have on the wider environment.

What soils do we have?

Scotland’s soils vary up and down the country depending on a number of factors, including:

Scotland has a very complex geology. Our rocks have been created and changed over the last 3 billion years by the forces of nature. They range from hard, ancient rocks that have been changed by high temperatures and pressures deep in the earth, to more recent soft sediments left behind by ice sheets and rivers. Soil is made from these materials so we call them 'parent materials'.

This variety of parent materials, combined with the other environmental variables, means that we have many different soils.

Most of our soils have formed since the end of the last ice age, so they are relatively young compared with soils in other parts of the world.

One of the main differences between Scotland’s soils and those in the rest of the UK is that Scotland’s soils contain a lot of organic matter. Organic matter is living and dead material from plants and animals, most of which is organic carbon. These organic-rich soils form a significant carbon store which is important in a climate change context - the more carbon we have in the soil, the less carbon we have in the form of greenhouse gases in the air.

One of the reasons we have so much organic material in our soils is because Scotland is relatively cold and wet, so the organic material doesn’t break down as quickly as it does in warmer and drier parts of the world, and so builds up in the soil.

Our wet climate also means that a lot of elements get washed out of our soils, leaving them relatively acid rich and nutrient poor.

What do our soils do?

Healthy soils can provide us with a wide range of benefits. Some of these benefits are obvious, like growing food, while many are less clear, like filtering water, reducing flood risk and influencing climate.

These benefits are sometimes called soil functions. Soil quality can be defined as the ability of soil to carry out its functions.

The main benefits we get from healthy soils include:

Soils also providing a platform for building on, however this can permanently remove all the other benefits that soils provide.

Most soils can provide more than one of these benefits at a time - effectively 'multitasking'.  In soil-speak we say that soils are 'multifunctional' or that they provide 'multiple benefits'.

What damages our soils?

Soils can be damaged by a number of processes, including:

These processes can be caused by natural events, by people or a combination of both and we often refer to these as pressures.  The main pressures affecting soils are:

Changes in climate can affect how soil works, mainly due to changes in soil wetness, soil temperature and also rainfall patterns.  Changes in land use and land management practices also affect soils, and soils may be lost altogether through development.

Pressures are caused by both global and local factors, including:

Why should we care?

Damaged soils can be a problem, not just for the soil itself, but also for people and the wider environment.

What is being done?

In Scotland, soils develop slowly; it can take hundreds of years to form a few centimetres of soil.  However, soils can be damaged or lost very quickly. For example, soil can be lost from a field in a few minutes by erosion during a heavy rain storm. We need to look after our soils so they can continue to provide the benefits we need, now and in future.

There is no one-size-fits-all soil protection policy for Scotland, but there is a range of policies and legislation that protects some aspects of soil. The Scottish Government published the Scottish Soil Framework in 2009 with the aim of promoting the sustainable management and protection of soils consistent with the economic, social and environmental needs of Scotland. The Framework set out to co-ordinate existing policies that related to soils. A number of actions to help protect soils and encourage sustainable soil management were agreed.

There is also a rich history of soil surveying, mapping and internationally important research - which continues today - in institutes and universities in Scotland. Together these create the basis for the information contained in this website.

You can find links to further information about our soils in the Useful Links page.