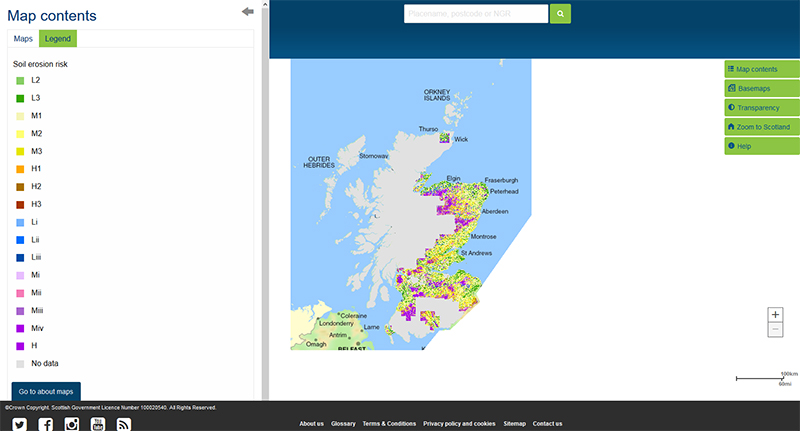 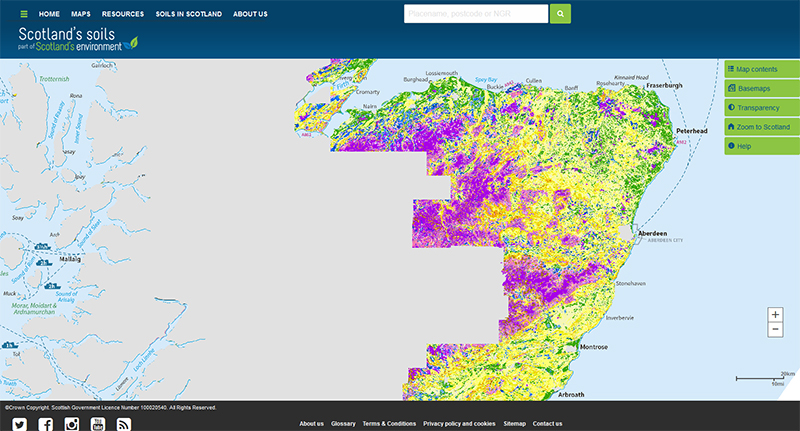 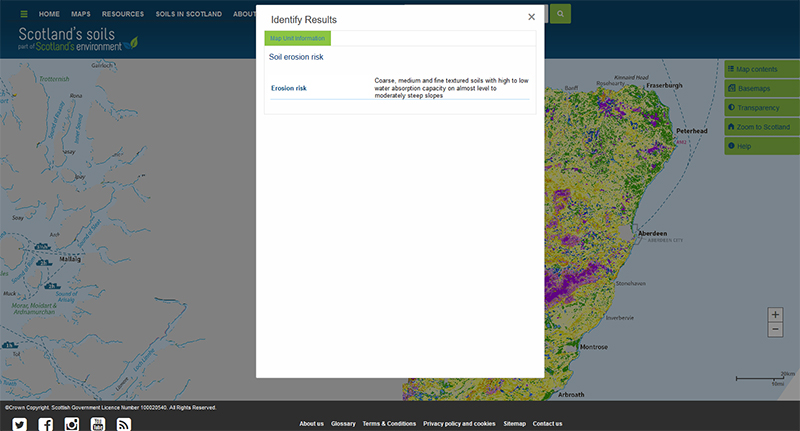 The map shows the risk of a bare soil being eroded by water under intense or prolonged rainfall. It covers most of Scotland’s cultivated agricultural land area. Soils with mineral topsoils have been classified separately from those with organic (peaty) surface layers.

The risk of soil erosion is shown in 3 main classes for soils with mineral topsoils: Low, Moderate or High. Each main class is divided into 3 subclasses (L1-3, M1-3 and H1-3) with the higher the number in each class indicating a greater risk of erosion within that class due to increases in slope, soil textures becoming more coarse and / or the soils becoming less able to absorb rainfall.

The risk of soil erosion for soils with organic (peaty) surfaces is also shown in 3 classes: Low, Moderate or High. The Low and Moderate classes are divided into subclasses (Li-iii and Mi–iv) with the higher the number in each risk class indicating a greater risk of erosion within that class due to increases in slope and/or the soils becoming less able to absorb rainfall.

The soil erosion risk dataset gives information on the likelihood of a bare soil being eroded under intense or prolonged rainfall. Mineral and organic soils are treated separately and are each divided into three main classes depending on the severity of the risk. These main classes are then subdivided to give more detail.

The soil erosion risk depends on the soil texture and its capacity to absorb rainfall as well as the slope of the land. The slope determines how erosive overland flow could be with steeper slopes leading to faster runoff.

Each of the soils in the Soil Map of Scotland (partial cover) dataset was assessed in terms of topsoil texture and grouped in broad categories with the more coarse textured soils being most susceptible to breaking down under intense or prolonged rainfall. The soil’s ability to absorb rainfall was assessed using the soil porosity, depth to a slowly permeable layer and inherent wetness (derived from the Hydrology of Soil Types (HOST) classification (Boorman et al., 1995). The Land Cover of Scotland map (1988)  was used to identify which soils were likely to be uncultivated and have an organic topsoil from those that were likely to be cultivated or uncultivated and have a mineral topsoil. Where the LCS88 map showed a mixture of both semi-natural and cultivated land cover, the latter was taken to represent the land cover class. The slope characteristics were derived from the Ordnance Survey Open data 50m DTM, OS data © Crown copyright and database right (2017). The map is a 50m raster grid. These characteristics were combined and the values obtained assigned to a risk category.

Where the soil map units were described as complexes (that is, more than one soil type is found in the area), the precautionary principle was applied and the soil within the complex most at risk of erosion was used to describe the whole map unit.

You can click on the map, or insert a grid reference or post code, to find out the risk of soil erosion occurring at that point. You can also download the map data from the James Hutton Institute data download page.